The book has two story lines which look separate to start with merge perfectly towards the end, with one suspect, but they don’t know his name or what he now looks like.

The book was full of suspense and tension throughout, which made it a very enjoyable read. Joy is now one of my new favourite authors and I will be going through her back catalogue to read more about Nikki Galena and her team.

Another exceptional read. The book kicks off with an unofficial body found in a cemetery, a body that has been their for years. Then a member of an exclusive and secretive drinking club called The Briar Patch is found dead. The two cases are being investigated separately but could there be a link.
​Well it’s down to Nicki and her team to find out who and why. It seems no one is telling the truth, we have plenty of twists through this book and I have to say it really does keep you guessing the whole way through. Old secrets come out and new secrets discovered. Not everyone is who they seem to be. And sometimes when you want to keep everything you do a secret cooperating with the police is not something you want to do.

Full of twists and turns, this is a crime thriller that will keep you turning the pages until the heart-stopping ending. Having read the book I have to fully agree!! I loved Nikki as the main character and the story flowed brilliantly around her. She is a great character and after reading this book I definitely want to read the previous ones!! For me, Joy is now an author to watch! Loved it – 5 stars from me!!!

Secrets are big in Buried on the Fens – their are lots of them and people seem willing to die in order to keep them.  Nothing is quite as it seems – my favourite type of book.  This all adds to the tension, which ratchets up page by page, chapter by chapter to what is a pretty good climax of a pretty good book and one I loved.  A recommended read!

There is a skeleton found in the church graveyard, there’s something strange about the position of the skeleton and the injuries don’t match with the historical evidence. Not long after there is another discovery, high end business woman Madeleine Prospero is found dead after a malicious attack. Nikki Galena is troubled by both deaths, secrets are being buried, nobody wants to talk for fear of retribution. Is there a connection, the rollercoaster ride of the investigation brings about a dramatic ‘didn’t see that coming’ conclusion.

BURIED ON THE FENS by Joy Ellis 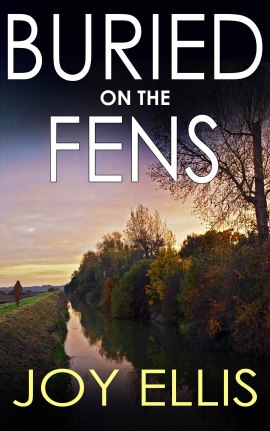 A SKELETON IS UNEARTHED FROM A SHALLOW GRAVE IN THE CHURCHYARD. BUT THIS WAS NOT AN OFFICIAL BURIAL. THE VICTIM WAS MURDERED DECADES AGO.

At the same time, Detective Nikki Galena and her team are investigating the brutal slaying of local businesswoman Madeline Prospero. She was a member of an exclusive and secretive drinking club called The Briar Patch. But they’ve got no suspects and no one is telling them the truth.

Meanwhile, the buried skeleton leads them on a trail to the village of Quintin Eaudyke. This is a troubled place. In the late seventies and eighties a reign of terror and abuse was unleashed on the close-knit population.

When more women from the The Briar Patch come under threat, Nikki faces a race against time to stop the killing.

Full of twists and turns, this is a crime thriller that will keep you turning the pages until the heart-stopping ending.

THE DETECTIVE
DI Nikki Galena: A police detective with nothing left to lose, she’s seen a girl die in her arms and her own family destroyed. She’s tough on criminals but fiercely loyal to her team.

DS Joseph Easter is the squeaky-clean new member of the team. But his nickname “Holy Joe” belies his former life as a soldier. He has a daughter and an ex-wife who wants his attention.

THE SETTING
The Lincolnshire Fens: great open skies brood over marshes, farmland, and nature reserves. It is not easy terrain for the Fenland Constabulary to police, due to the distances between some of the remote Fen villages, the dangerous and often misty lanes, and the poor telephone coverage. There are still villages where the oldest residents have never set foot outside their own farmland and a visit to the nearest town is a major event. But it has a strange airy beauty to it, and above it all are the biggest skies you’ve ever seen. 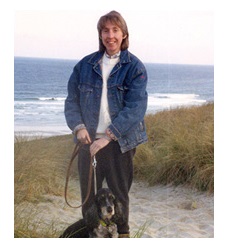 Joy Ellis grew up in Kent but moved to London when she won an apprenticeship with the prestigious Mayfair flower shop, Constance Spry Ltd.
Many years later, having run her own florist shop in Weybridge, Ellis took part in a writer’s workshop in Greece and was encouraged by her tutor, Sue Townsend to begin writing seriously. She now lives in the Lincolnshire Fens with her partner Jacqueline and their Springer spaniels, Woody and Alfie.