‘A mind blowing read. The pace increased steadily throughout the book until I was turning page after page well into the night’.

Narcoterrorism wreaks havoc on the world as drug cartels operate as dominating, murderous dictatorships. The powerful Irish Drug Cartel has set up drug manufacturing plants around the world and they will kill anyone who gets in their way. Sarah is an ambitious policewoman from an antiterrorist unit. She’s also smart, beautiful, and extremely good at her job, which is why she is assigned to an Interpol Incident Response Team in Manchester, set up to find and stop The Cartel. Alongside colleagues from the United Kingdom’s SAS, she must quickly learn new Close Quarters Battle tactics and apply them to a vengeful and threatening battlefield. Sarah’s investigation appears to be going well until the fight turns personal. She must now struggle to save her friends, family, and even herself. Spanning the globe with a keen knowledge of special forces tactics and some genuinely shocking twists, this book warns of a bloody, drug-addled future we may soon face.

This is not my usual type of book but I like to read books that are a little out of my comfort zone occasionally and this is certainly different to anything I have ever read before, and I mean that in a good way.  I cannot imagine how you start writing something like this the work and research that must have gone into it must be astronomical.  There is immense detail in the strategies that make up the book, and include in that the knowledge of all the agencies involved, my mind boggles just thinking about it.

The book is set 10 years in the future with William being King of England.  A drug cartel is taking over internationally. Military and law enforcement agencies work together to take them down.  Sarah is an Indonesian Policewoman but her role is very different to a UK Policewoman as she is more military than law enforcement she is extremely fit and has numerous skills that the UK need so she is seconded to a special task force.  Michael is SAS but also has special skills.  The two work together (and play together).  They are frequently found to be in the middle of the action as the reader is witness to the action and violence that drive the Cartel’s.  Violence, romance, friendships , corruption, heartbreak it is all in there:  throw a psychopathic killer, that  disembowels women and beats men to death with a board of nails, into the mix and you can be sure you are in for one hell of a ride.  There are many twists and turns and several curve balls that add to the adrenaline pumping suspense.  This is a totally gripping read that is scarily realistic.

It is a little slow going for the first 5 chapters, as we get to know the characters and their history, but from there onwards the pace increases steadily until I was turning page after page well into the night.

A mind blowing read and I thank Justin very much for gifting me the book.

Justin W.M. Roberts was born in London, son of a British Army General, and grew up in Hong Kong, Germany, and England. After graduating from Hull university with a degree in Politics, Philosophy, and Psychology, he continued traveling and living Europe, Africa, and Asia.

He currently lives in Indonesia where he is an analyst of political affairs and an active promoter of secular humanism.

Authors of military thrillers are welcome to PM him for book reviews. 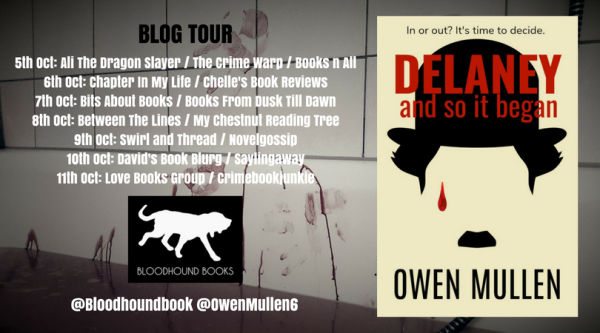 Thank you to Sarah Hardy, Owen Mullen and Bloodhound Books for inviting me on the Blog Tour for this new release.

‘There are many twists and turns along the way that keeps the suspense building right the way through.’

PI Vincent Delaney thought he was done with the NOPD until a string of seemingly unrelated child murders brings an unexpected invitation from the FBI, and his old boss.
A serial killer is roaming the South, preying on children appearing in pageants, and the police want him to go undercover using his own family. Accepting would mean lying to people he loves and maybe even putting them in harm’s way.
In Baton Rouge, a violent criminal has escaped and is seeking revenge for the brother Delaney shot dead. But Delaney isn’t going anywhere. He has unfinished business. Meanwhile, north of the French Quarter, shopkeepers are being extorted and ask for Delaney’s help. Extortion is a matter for the police.
But what do you do when those responsible are the police? Delaney has his work cut out and he’ll be lucky if he makes it out of this alive…
Owen Mullen is a The Mcllvanney Prize long listed Novelist

I do like the way Owen Mullen writes and loved the Charlie Cameron series so was looking forward to reading this one and I wasn’t disappointed.

The book moves along at a steady pace gaining momentum as it progresses which has the reader turning pages at an ever increasing rate.

Delaney is an ex detective turned PI and has serious problems with relationships due to his dealings with criminals.  He is a very likeable character with a lot to give and a very compassionate nature, I love him.

He has no regrets about leaving the police force but it appears they are having difficulty managing without him.  When little children keep being abducted and killed at Pageants Delaney has no choice but to get involved in the case and ‘so it begins’….

There are many twists and turns along the way that keeps the suspense building right the way through.

Thank you to Bloodhound Books for the advance copy.

School was a waste of time for me. Or rather, I wasted time; my own and every teacher’s who tried to get me to work. It took twenty years to appreciate what they were telling me. Life has rules. They aren’t written down but they exist nevertheless. I got that. Eventually. But by then I was thirty five.
Along the way I missed an important clue. At ten I won a national primary schools short story competition – and didn’t write anything else for forty years.
SMART BOY WANTED APPLY WITHIN
As a teenager my big obsession was music. Early on I realised if I was successful I would probably be rich and famous and pull lots of girls.
So how did that turn out?
Well, you haven’t heard of me, have you? And this morning I caught myself worrying about the electricity bill. So the short answer is: one out of three ain’t bad.
Running around the country in a Transit van with your mates is fun. It’s your very own gang. You against the world. Until you fall out and the dream lies bleeding on the dressing-room floor.
When that happened I went to London [everybody from Scotland goes to London, it’s like first footing at New Year, or ten pints of lager and a vindaloo on a Friday night; a sacred tradition] and became a session singer. I also started gigging with different bands on the circuit.
Back in Scotland – most of us come back with wild tales of great success, none of them true – I wondered what I should do with myself and didn’t have to wait long for the answer. Her name was Christine. We got married, I went to Strathclyde Uni and got a bunch of letters after my name, and toughing it out at Shotts Miner’s Welfare, or dodging flying beer cans at the Café Club in Baillieston, was in the past. The long hair was short now, I wore a suit and pretended to like people I didn’t like because we were ‘colleagues’.
After many adventures I started my own marketing and design business and did alright. Christine and I were very happy, we travelled all over the place; India, Brazil, Botswana, Nepal, Borneo, Japan. One day I suggested we move. To the Greek islands. So we did. We bought land and built a beautiful villa overlooking the Mediterranean. Then the pan global financial crash happened, years of fiscal carelessness finally caught up with Greece; the exchange rate dived and the cost of living in Paradise went through the roof.
I had to do something. Then I remembered the short story competition. I had been good at writing, hadn’t I?
I wrote another short story called The King Is Dead…the first thing I’d written since primary school. When I typed the last word [Christine taught me to type] I held the pages in my hand then started to read. An hour and a half, rooted to the chair unable to believe what was in front of my eyes. For four decades I had shunned a god given gift. And as I read I started to understand why. It was awful. Not just bad. Bloody terrible.
But I kept going.
And now, eight years and seven books later, three literary agents plus two I turned down [they were reading a different book] I am a writer. My books are on Amazon. People buy them and come back for more.
One seasoned London agent has predicted I am destined to be ‘a major new force in British crime fiction.’
Yeah!
So is the moral: follow my example, find something you’re good at and stick with it. Hardly. I didn’t, did I? Do it your own way; it’s your life.