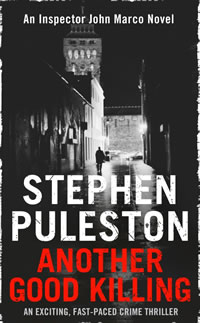 Today is my stop on the Blog Tour for ANOTHER GOOD KILLING by Stephen Puleston.  This is Book 2 in the brilliant Inspector Marco series. The series just gets better and better I simply couldnt put this book down I was gripped from the very beginning.

Does any man deserve to die?

When a well-connected and wealthy banker is found dead in his luxury car in the middle of Cardiff, the motive for the crime seems clear. The killer even left a note telling the world the man deserved to die, simply for his greed.
But despite the obvious clues, seasoned detective, John Marco has his doubts that this was just a disgruntled employee. The killing was too clean, the crime scene too perfect. Marco also has a gut feeling that the family of the victim are hiding something…

And when another business executive is murdered, Marco’s fears come true – there is now a serial killer to catch. An online video points to a violent anarchist group, determined to make the bankers pay for their perceived sins. But Marco doubts a ragtag bunch of anarchists would be granted breathing space in the world of the sophisticated uber rich.

As the case progresses and Marco starts piecing together the clues, things take a dramatic twist when a member of Marco’s team is kidnapped. Now the killer has made things personal and Marco faces a race against time to bring the murder to justice – before it’s too late…

I have to admit I am really getting to love these Marco books I hope Stephen has more planned.

In the previous books Marco gives the impression of being a bit like a spoiled child.  That changes in this book when he is forced to wake up and smell the coffee and he realises that he can cope with the struggles life throws at him without a bottle.

The story begins with a man being found dead in his car.  Investigations uncover a lot of issues.  Dolman is a banker hated by a group of people.  The relationship with his wife has disintegrated and he was in the process of making changes that didn’t go down well with his sons.  So a long list of possible suspects but all seem to have alibis or little in the way of motive.  Then there is the murder weapon, a Stiletto blade is a feminine type of weapon but would a woman have the strength to murder so quickly and cleanly?

There is a lot going on in the book as we follow the team unravelling strands and making little progress.  All through the book there is the suspense that keeps the adrenaline pumping and the pages turning.  Personal issues also make an appearance and that just adds to the suspense.  Twist and turns around every corner and the unlikeable Hobbs waiting in the wings to take over if Marco fails.

WOW this was a real page-turner the series is upping its game with every book and I cant wait to read the next in the series.

5 big shiny stars from me

I love the novels of Raymond Chandler, Ian Rankin, Mark Billingham, Henning Mankell, Val McDermid – the list could go on! And I enjoy watching detective series on the television the recent Hinterland series based near Aberystwyth in Wales was great. One of my favourites is the French series Spiral but The Bridge and Broadchurch and the Rebus series with Ken Stott and Kenneth Branagh in Wallander are great too.

I have been on writing courses at the Welsh Writers Centre in Llanystymdwy, North Wales tutored by Matt Whyman and Marcus Sedgwick as well as crime writing courses with Peter Robinson and Andrew Taylor at the Scottish Writers centre.
I was born in Anglesey an island off the north Wales coast and after leaving school in Holyhead I went to University in London before training as a solicitor/lawyer. I practised in a small family business doing criminal work in the magistrates and crown courts, divorce and family work.

I still live on Anglesey, North Wales near the beach and the mountains of Snowdonia

A Cat, A Book, and A Cup of Tea
Millennial Book Review
The Reading Table Blog