MANY MANY THANKS to the brilliant bloggers who helped with the Blog Tour for MURDER NEVER MISSES by Faith Martin.  You really are the best and your help pushed this book to the top of the Amazon charts again.  Thank you so much.  Jill, Faith & Joffe Books

I’ve often written how much I like the character of Hillary Greene, and I’m also really enjoying the development of her relationship with her new team, and her romance with Steven Crayle.  Read more here

As is usual with Faith Martin’s books, the plots and subplots intertwine, keeping the reader guessing and forcing you to read on.  Read more here

I have been waiting for this book! I read a lot of series and some of them serve quite well as standalone. But, this book follows close on the heels of Book 13 in the series, Murder of a Lover. I suggest at least reading that book before this one, although reference is made clearly enough if a reader wants to pick up from this book.  Read more here

As the stalker antes the game, Hillary is determined to track the final days of the missing women…. and preventing another killing when the stalker turns his attention to someone close to the investigation.  Read more here

Will Hilary and her team finally solve the case of the disappeared and murdered women?  Are they connected to the stalker, who is currently stalking Hilary?  Will Hilary survive?  Will she apprehend the man, who has been stalking her?  Well for the answers to those questions and more you are just going to have to read the book for yourselves to find out because I am just not going to tell you.  Read more here

Another great story of the strong and feisty Hillary Green. She really is such a strong, amazing woman! I’m really enjoying this character. She’s strong, but not in a way where she’s too good for everybody and always pushing them away. She seems like a normal working woman, and I appreciated that.  Read more here

I love this series.
It’s one of those that you can comfortably sit with and enjoy. Nothing too scary,
nothing too uncomfortable and a smile along the way with characters that you take
to and become like that old pair of slippers- oh so comfortable.  Read more here

What Emma Read Next

It’s an easy enjoyable read and one that you don’t want to put down as it has that feeling that it carries on without you when you are not reading it .. I know that sounds odd but I guess that’s the good writing!  Read more here

This was a nicely paced book and if I had more time I would probably have read it in one sitting, meaning I would have pulled an all nighter. But since I am sleep deprived as it is with Natalia and her waking up to breastfeed all night, I didn’t finish it for a few days. I loved the twist of the story but I can’t tell you more without spoiling it for you.  Read more here

The book is a good read but as we know who the stalker is it takes something of the mystery away out of the book.  This doesn’t detract though as we don’t know how involved he was in the other case, if at all, and also how far he will go with the stalking.  Read more here 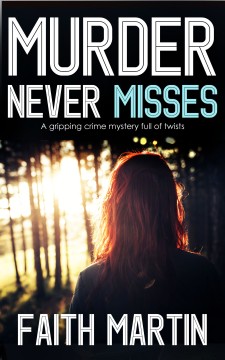 Looking for a brilliant best-selling murder mystery with a feisty female detective?

DETECTIVE HILLARY GREENE IS SOLVING THE COLD CASES NO ONE ELSE COULD CRACK.

PLEASE NOTE THIS IS A REVISED EDITION OF A BOOK FIRST PUBLISHED AS “WALK A NARROW MILE.”

Three missing young women. One evil stalker. But Hillary doesn’t think it all adds up.

Hillary is recovering from the vicious attack by her stalker. It appears that he is also behind the disappearance and murder of three women. Her bosses want these unsolved cases closed, but Hillary has a theory that will shock everyone.

However, as the truth comes to light, Hillary and the team are faced with a dire emergency — can they prevent an imminent murder?

Hillary Greene has returned to Thames Valley Police HQ, acting as a cold-case consultant for the Crime Review Team, looking into murders which the police have never been able to solve.

She wasn’t sure she wanted to go back. But solving crimes is irresistible for Hillary Greene. And it doesn’t hurt that her new boss is devastatingly handsome.

This is a crime mystery full of well-observed characters, which will have you gripped from start to the absolutely thrilling conclusion.

MURDER NEVER MISSES is the fourteenth in a series of page-turning crime thrillers set in Oxfordshire.

THE DETECTIVE
DI Hillary Greene
An attractive, single woman nearing the landmark age of fifty, Hillary Greene was a police officer of many years’ experience (earning the rank of DI) and came up through the ranks. Consequently, she knew how the system worked, and was always fiercely loyal to the force without being blinkered to its faults. Forced to retire early through no fault of her own, she has now returned to the force as a civilian consultant on cold cases. She still enjoys a rather enigmatic relationship with the wily Commander Marcus Donleavy, but it is her new boss, the very attractive Steven Crayle, who is likely to cause her the most problems now!

PLEASE NOTE THIS IS A REVISED EDITION OF A BOOK FIRST PUBLISHED AS “WALK A NARROW MILE.”