Today my featured JOFFE BOOKS BOX SET is the Detective Tyrone Swift Trilogy by the critically acclaimed GRETTA MULROONEY.  You can buy the first 3 books in this brilliant series for just 3.99 GBP. 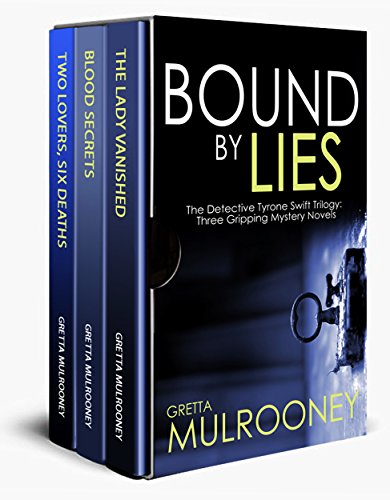 A missing woman holds the key to a valuable inheritance
Florence Davenport hires Swift to find her missing stepmother. There are no leads and no suspects, but if the body is found, Florence will inherit half of a very valuable house.

Fifteen years ago a teenage boy, Teddy Bartlett, went to a woods on the outskirts of London and was beaten to a pulp and left damaged for life. The police never found who did it or why he was targeted.
Now, the boy’s father, recently returned from Australia, wants to find out what really happened to his son. He hires private detective Tyrone Swift to investigate the tragic crime.

A man stabs his girlfriend to death. Then hangs himself, leaving a note confessing to the murder. Open and shut case? Not for detective Tyrone Swift
Dominic Merrell’s estranged wife Georgie doesn’t believe that he could have done it. Detective Swift discovers that Dominic was a reliable, devoted husband and father for eighteen years until he met the beautiful, charismatic Lisa, who he left his wife for. No one can believe that Dominic was capable of murder. But if it wasn’t him, then who killed the seductive but chaotic Lisa?

THE DETECTIVE
Tyrone Swift is an ex-police detective who now works privately. He’s survived a stabbing and his fiancée running off with another man. Swift’s personal life is complicated. He is still involved with his ex-wife Ruth.

THE SETTING
The streets of London with their vibrant mix of nationalities, cultures, and rich and poor are beautifully evoked. From the quiet suburbs with their veneer of happy family life, to the bustling centre with refugees struggling to survive, to exclusive penthouses where the rich can have anything they want delivered.

THE AUTHOR
Gretta is a critically acclaimed author of best-selling detective and literary fiction. ‘Mulrooney has a real gift for dialogue, the words and phrases ring true and make her characters wonderfully real . . . A tenderly funny and genuinely moving piece. I loved it.’ Fiona Morrow, Time Out (about ARABY) ‘A beautifully observed study of reconciliation, Araby makes astute points about conflict and shifting values between generations.’ James Eve, The Times

Don’t miss out on this beautifully written series! YOU GET ALL THREE OF THE ABOVE BOOKS IN THIS EDITION

What readers are saying about the Tyrone Swift books:

“A well written and gripping crime thriller. The chief character is so well defined and so likeable. The story was intriguing and had plenty of twists and turns. ” Julia Corbett

“Swift is a good character, suitable for people who like PD James, the story is believable and comes together well.”