Today is the last of my BOX SET MONDAY series and we round off with the brilliant SPY CHASER series by Derek Thompson. Thomas Bladen is a character that becomes very addictive leaving you eagerly awaiting the next release in this gripping series. 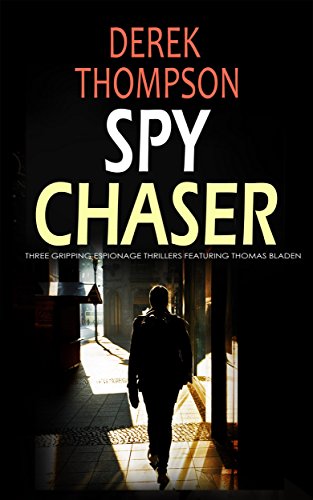 Three gripping spy thrillers set in a shadowy unit of the British government. Everything Thomas cares about is at stake, including the woman he loves.

For the first time ever, the three best-selling books featuring Thomas Bladen are available in one edition.

Follow Thomas Bladen’s heart-stopping journey to uncover the truth. It all starts when during a routine operation he sees a shooting which will expose a world of corruption and danger.

When his on-again, off-again girlfriend Miranda is drawn into the conspiracy, Thomas must decide who he can trust to help him save her life.

In book two, when Amy Johanson is killed during a weapons test, Thomas and his partner Karl are determined to get to the bottom of what happened. But they are thwarted by dangerous and powerful forces. Thomas’s on-again, off-again girlfriend Miranda and her family are once again put in harm’s way. Can Thomas get justice for Amy while navigating the shifting sands of espionage, big business, and the mystery of Karl’s past?

THESE BOOKS WERE PREVIOUSLY PUBLISHED SEPARATELY AS STANDPOINT, LINE OF SIGHT, AND CAUSE & EFFECT

What the readers are saying:

“Complex and full of twists and turns, this is a very good thriller which keeps the reader on tenterhooks throughout.” Ann Stanmore

“Kept me up far too late at night.” Gemma Donnelly

“One of the best spy thrillers I’ve read in a long time.” Lacancan

“Good read for anyone who enjoys a thriller that will keep them hooked from start to finish.” Jfaulknercourt