Today I am thrilled to be on the Blog Tour for Martha’s Secrets by Joanna Larum.  It is thanks to Joanna that I refound my love of historical fiction and this book is unputdownably brilliant.  It has a little psychological suspense interwoven which would appeal to readers of Mystery and Suspense. 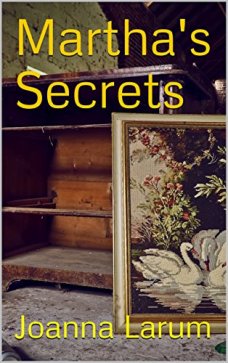 Edith Coleman’s two illegitimate children (Daniel and Martha) spent their childhood working like slaves alongside their mother in the family laundry business in South Bank, a small town near Middlesbrough in the North Riding of Yorkshire They were regularly beaten and starved but their mother never found the courage to stand up for her children against her parents, Grandad Joshua and Granny Lillian. It was only when Daniel was eight years old that he was finally allowed to go to school to make the best use of his intelligence and Martha followed him a couple of years later.

Daniel’s birth was as the result of a night-time fling in a back alley, but Martha was the result of Edith’s rape by her own father and so she inherited a double portion of her father/grandfather’s wicked character. Both of Edith’s children survived this childhood with the ambition to better themselves and Daniel started a carting business while Martha renovates furniture in the second-hand shop Daniel founded.

In ‘Martha’s Secrets’, Daniel and Martha are now both grown up and the dreaded grandparents have died, leaving the small family to finally begin living a reasonable life. Edith has married a man she had long adored from afar, gaining a step-daughter and a home of her own. Daniel and Martha still live in York Street but the laundry is no longer used. Life should now be happy for them all, but World War 1 has begun and Daniel fears being conscripted into the Army. He has acquired a ‘son’ in the foundling Georgie who is so grateful for his new home away from the workhouse that he would do anything to protect Daniel, even if that means denouncing Daniel’s sister for her wicked ways. But Daniel and Edith don’t want to see the character flaws in Martha, until blackmail, theft and murder rear their ugly heads and the blame can only be laid at Martha’s door.

Can Georgie and his new ally, Dolly, prove their suspicions about Martha? And will Martha consent to changing her character and lifestyle to fit in with her family or will she follow her own road to perdition?

Although this is the sequel to SOMETHING WICKED THIS WAY COMES it works excellently as stand alone. It was the first book that caused me to rediscover my love of Historical Fiction.

The story picks up as war has broken out and many of the local young men have volunteered to go and fight supported by their families and friends. They depart amidst a lot of celebrations. The expectation is that they will go and wipe out the enemy and be home for Christmas. The reality of these young men going off to war soon becomes apparent as 3 brothers die in the trenches.

The author details the side of war that we often forget the soldiers losing limbs to Trench Foot and the time spent walking in mud and laying in wait. The loss of life is heavy on the heart and South Bank soon becomes disillusioned with it all.

The main characters in the book are Edith, Daniel and Martha whom we met in the earlier book but Joanna has cleverly caught the reader up with what they may have missed.

Despite the abuse Daniel suffered as a child at the hands of his grandparents he has grown into a very empathetic and considerate young man who is terrified of being conscripted and made to fight and kill. His character grows in this book and we get to know him very well.

Martha is a different story she has inherited an evil streak and that is packaged inside a pretty young girl. She is very adept at manipulating people. Cross Martha and suffer the consequences as many have found out. Martha brings an element of suspense to the story as we wonder what she will get up to next. Her brother and mother wear rose tinted glasses and only see the pretty girl with an engaging smile.

Edith, the mother, suffered a lifetime of abuse and her children are what kept her going so they are her world and she will protect them with her life. The extent of that mothers love is made clear in the story.

New characters are introduced, George and Dolly, and they bring a lot to the story. They develop well throughout the story.

This is a brilliant read that had me turning page after page. Historical fiction at its very best and the suspense of what Martha will do next is there throughout the book. An excellent read.

5 golden stars from me. Looking forward to the next book.

I only went to school to learn to read. At age 6, I decided I COULD read and promptly left, by the school gate, the same gate which my mother marched me back through 10 minutes later. So I had to spend the next 12 years at school, learning lots of different things, none of which lived up to the excitement of reading. Wanting to be a writer was a natural progression, because there is nothing as exciting as inventing the story yourself. But it’s taken over 50 years before I dared to present my stories for other people to read. So, here they are! I’ll just creep behind the sofa.