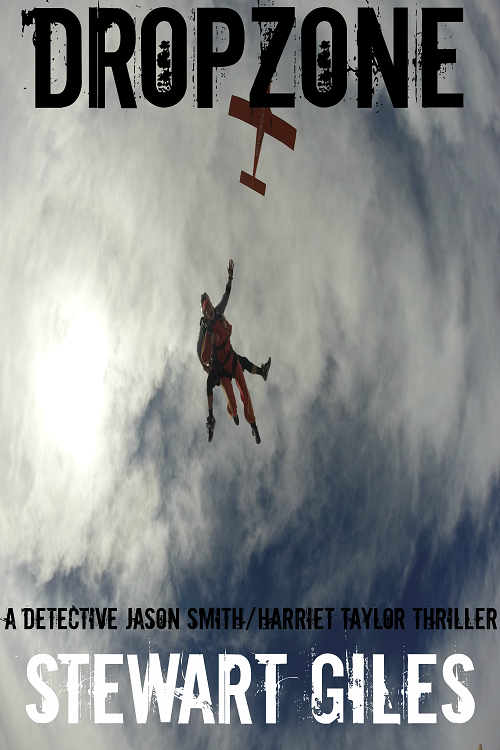 Yesterday I reshared my review of THE ENIGMA if you didnt see that you can read it here. Today as promised I am sharing a #booklaunch with a difference. Dropzone begins with the death of a skydiver whose parachutes failed. Stewart received a lot of help and advice from his Skydiving friends at SKYDIVE ON THE VAAL (South Africa). On Sunday a paperback copy of DROPZONE went skydiving. It was pushed out of the aircraft along with the skydivers and left to make its own way down without a parachute (just like the skydiver in the story) Below are the photos proving that DROPZONE really can fly.

As with all of Stewart’s books there are some nice little red herrings and more dead people along the way as we try and work out what happened.  Read more

I highly recommend Dropzone. It will have your eyes glued to the pages and your heart thumping out of your chest. Read more here

This book has made me want to read every single book Stewart has written about Smith and Taylor, so much I have got every book on my kindle!   Read more here

Stewart Giles mixes an absorbing tale with patches of dark human behaviour and patches of humour which all make a great balance. Once again, as with all his books, it is impossible to second-guess who is behind the murders although I try every time.  Read more here

On The Shelf Reviews

If you’re looking for a novel with plenty of fast paced action and heart in your mouth moments, I think Dropzone is the book for you.  Read more here

The Word is Out

A terrific murder mystery, well written with plenty of twists and very engaging characters (including a repulsive pug!) which will keep the reader engrossed right up to the last page. Highly recommended, as are all the books by this author. 5* Read more here

DROPZONE is well written, the suspense starts with the flight of Brandon Stone and doesn’t let up until the very last page. Read more here

Another fantastic installment from my favourite crime fighting, murders solving duo! Another twisting plot to keep you hooked. I don’t want to say too much sort from make sure you buy it!! Read more here

I really liked the twists and turns in this book. The characters are entertaining, interesting, and full of life. The suspense of who could have pulled this off will pull you in from the beginning and won’t let you go until the end of the book.  Read more here

Do you really need to ask? I loved it! So much so that I asked Stewart for an interview and I am going live with it in a few days.  Read more here

Once again it’s full of red herrings, keeping you guessing, and pondering on how did 2 chutes fail. Who is the murderer? It’s a good gripping pace, and highly enjoyed.   Read more here

It is five stars from me again, this is possibly my favourite DS Smith book so far and can’t wait for his next release!! Read more here

From #1 best-selling author: Stewart Giles comes book 2 in the very popular DS Jason Smith and DC Harriet Taylor series.
Brandon Stone is doing his first Accelerated Free Fall Skydive. He has done the training and his instructors are with him so nothing can go wrong…. Can it? A double malfunction and Brandon is staring death in the face. A very rare accident. Or is it?

Jason is returning to work after 3 months recovering from injuries at the hands of Boronov. Light duties? Not if Jason can help it.

DC Harriet Taylor is taking a well deserved holiday with Jon Finch that includes tandem skydiving. Out of all the planes in the country they were on the same one as Brandon.

With a detective as a witness this should be an easy case to solve. Wrong! Jason and the team need all the help they can get to unravel the lies and find the clues before more bodies turn up.

This is a gripping story with twists, turns and intrigue all the way through. A fast moving page-turner you will not be able to put down.

DC Harriet Taylor had only been married for 2 years when her philandering husband was killed in a car crash. It is common knowledge around the station that the woman who died next to him was his latest lover. Harriet transferred to Trotterdown to escape the gossip and sympathetic looks. She is now finding her way around Cornwall and getting to know the other members of the team.

DS Jason Smith is an Australian who was sent to York to live with his Grandmother when his sister disappeared from a beach. He has suffered many losses in his life and is now a dedicated detective. He is a bit of a loose cannon – he has his own way of doing things and that doesn’t always mean following orders and procedures.

What readers are saying about Dropzone:
As always, great plot with plenty of suspense and twists to keep you guessing until the end. – Kirsty Nimmo

“I loved this book. I think this maybe my very favourite Stewart Giles. It kept me on the edge to the end.” – Alison Gitelson

“I was quickly drawn into a world of air adventure and read it in two sittings. It’s an engaging, fast paced murder/mystery with believable characters, plot and background on their private lives.” – Carol Stone

It starts with an adrenaline pumping chapter and then delves into the investigation with a sprinkling of dead ends and jaw dropping twists and turns. – Books ‘n’ All

After reading English at 3 Universities and graduating from none of them, I set off travelling around the world with my wife, Ann, finally settling in South Africa, where we still live. After Ann dropped a rather large speaker on my head I came up with the idea for a detective series. DS Jason Smith was born. Smith, the first in the series was finished a few months later. 3 years and 8 DS Smith books later, Joffe Books wondered if I would be interested in working with them. As a self-published author, I agreed. However, we decided on a new series – the DC Harriet Taylor Cornwall series. The Beekeeper hit the shelves and hit the number one spot in Australia. The second in the series, The Perfect Murder did just as well. The third in the series, The Backpacker I have self-published and there are plenty more to come. Unworthy, the ninth Smith instalment was followed by a totally new start to a series – a collaboration between the Smith and Harriet thrillers. Entitled The Enigma, it brings together the broody, enigmatic Jason Smith and the more level-headed Harriet Taylor. Miranda is something totally different. A stand-alone psychological thriller, it is a real departure from anything else I’ve written before. Dropzone, book 2 in the  Smith/Harriet series is now available and the 10th Smith instalment will be released later in the year.

You can join the Stewart Giles reader club by completing this form  https://mailchi.mp/a64f6de4c541/sgreadersclub